Alma Stokes. Raised in San Bernardino, she came to Pasadena in 1953 when she began her long and still current history of being involved in everything. She began teaching up the street at Washington Elementary School in 1963 and then taught at many other PUSD schools for several decades.  She was a longtime member of First AME Church, then Brown Memorial AME Church, then St. Barnabas Episcopal Church, and for the last 40+ years, she has been an active member of All Saints Episcopal Church.   She has served on the board of many groups – including the Pasadena Educational Foundation who will be honoring her this Wednesday, May 25.  Some examples of her lived Pasadena history include:  she took a year off from teaching to work for the Pasadena Redevelopment Agency to relocate the residents who were forcibly removed from their owner occupied, well maintained single family homes to build what is now known as Kings Villages; she worked with some neighbors and First AME Church members to successfully lobby against the 210 Freeway being routed along Washington Blvd and then north along Arroyo Blvd; and when Martin Luther King Jr last spoke in Pasadena in 1965, she was present at Friendship Baptist Church. ​

Brian Biery.  A third generation Pasadenan, Brian Biery keeps quite busy.  He teaches courses on Advocacy/Social Justice and Human Development as an Adjunct Professor at Pacific Oaks College.  He is a Partner of the DBK Group, which provides technical assistance to government agencies on matters of law enforcement, criminal justice, public service, and police/community relations.  He serves as an Associate with The Aspire Group, a firm that specializes in innovative organizational effectiveness with an emphasis on diverse communities.  He is the Principal of Brian Biery Consulting, a firm dedicated to assisting nonprofits to reach their organizational, programmatic, and leadership goals.  Additionally, he writes regularly for the L.A. Progressive and Culture Honey and numerous newspapers and magazines have published his photographs.

Danny Parker.  A Pasadena native and GHNA board member, Danny Parker has lived in Garfield Heights since 1989.  He attended Sequoyah School for 1st through 4th grade and then Pasadena public schools from 5th grade forward.  When busing for desegregation began in September 1970, he was bussed to Wilson Junior High School and then bussed to John Muir High School.  He is a corporate attorney and provides strategic planning and financial analysis to startups, small businesses, and former professional athletes.  He volunteers locally and quite extensively with his college.

Speakers:
Rev. Gregory Gibbs. Minister, Pasadena Buddhist Temple
Bryan Takeda.  Bryan Takeda owns Affinity Associates and has been actively involved in the Nikkei community for over three decades.  In 1986, he joined the board of the Pasadena Japanese Cultural Institute and promoted Japanese culture, language, friendship, and goodwill between Japan and the United States.  In 1996, he established the Nikkei Federation and contributed to community partnerships, development, and youth leadership.  Since 2002, Bryan has served on the Pasadena Sister Cities Committee, Mishima Subcommittee and established the Friendship Youth Exchange Program. Between 2009 and 2012, he served as Program Director for the U.S.-Japan Council. Following the March 2011 Great East Japan Earthquake disaster, he helped raise over $1 million in contributions for hard-hit regions of the disaster zone. His most recent project is Kansha Pasadena, which strives to honor, preserve, and share the history of Japanese Americans in the Greater Pasadena area.  In November 2021, Mr. Takeda was awarded the Order of the Rising Sun, Gold and Silver Rays by the government of Japan for contributing to the introduction of Japanese culture and promoting friendly relations between Japan and the United States.
Additional Japanese Sites of Interest:

Lincoln Nursery
(804 Lincoln Avenue.) Founded in 1903 by a German family, the wonderfully stocked Lincoln Avenue Nursery was purchased in 1923 by the Takemura family.  When Mr. and Mrs. Takemura were sent to internment camps during World War 2, a kind young couple took care of the nursery.  After 80 years of family ownership, the Takemuras sold the nursery in 2003 to Ramon Franco who immigrated from Poncitlan, Jalisco, Mexico at the age of 14.   https://lincolnavenuenursery.com/about-us/

The Tongva and Gabrieliño Indigenous Community

Prior to 1848, Pasadena as well as the rest of California was part of Mexico.  Correspondingly, the land now part of the city of Pasadena was owned by Mexican citizens.   Early in the 20th century, there were three primary areas where Mexican Americans lived in Pasadena – on the south side, along the railroad tracks on South Raymond Avenue and South Broadway (now Arroyo Parkway) between Del Mar and Glenarm; an area known as Chihuahuita, which was located on the far east side of Pasadena and over time reduced to an area just outside the Pasadena city limits between Madre Street and Rosemead Blvd. and between Del Mar Blvd. and Colorado Blvd.; and the CypressWinona area (near the intersection of Lincoln and Orange Grove) that was historically multi-racial.  In the early 20th century, Pasadena created two segregated schools for Mexican Americans – Junipero Serra on South Raymond Avenue and Chihuahuita in the Chihuahuita area.

School Desegregation
A district court ordered the Pasadena Unified School District to desegregate its schools.  PUSD reluctantly complied by implementing district wide busing in September 1970.  It should be noted that despite vocal opposition at the time to busing, busing existed in PUSD prior to busing for desegregation.  For example, at one time, students in the Linda Vista area were bused past Washington Junior High School in Northwest Pasadena all the way to Eliot Junior High School in Altadena.
​
CLICK HERE to see the “Racial and Ethnic Elementary Enrollment” chart

The busing for desegregation plan as implemented in September 1970 worked as followed.  1 of the 5 junior high schools, Marshall, became Pasadena High School West Campus and 9th graders were shifted from junior high school to high school.  The elementary schools were split in 2 with some schools being K-3 and the others being 4-6.  Part of the court decree was that no school could have a majority of a minority; at that time, PUSD was 30% Black, 8.2% Spanish surname; and 2.7% Asian, which meant that the court decree dictated that no school could have a majority of Black students.  Elementary schools in Northwest Pasadena and West Altadena were paired with schools/areas in other parts of the district to achieve racial balance.  For example, students from the Longfellow (in north central Pasadena) attendance area attended K-3 at Franklin in West Altadena and Franklin attendance area students attended 4-6 at Longfellow.  The attendance zones for the 4 junior high schools were generally along east-west swaths.  McKinley Junior High School’s zone was along the southern tier of the city (except for the southeast) and then west of Lincoln Avenue; Wilson Junior High School’s zone included the next tier that extended to Washington Blvd on the north (and included Garfield Heights); Washington Junior High School’s zone was the next east west swath and was north of Washington Blvd.; and Eliot Junior High School’s zone was the most northerly tier and also included Sierra Madre.  The high school attendance districts were more convoluted.  Additionally, school schedules were staggered to accommodate wide-scale busing.

The students who did remain in the PUSD attended schools with diverse student bodies that exposed them to the diverse world they would inhabit as adults.  Corporate America has embraced that type of exposure through increasingly widespread DEI (diversity equity and inclusion) efforts and initiatives to increase global competitiveness and enhance decision-making processes.

The completion of the 210 and 710 (stub) freeways in Pasadena in 1975 caused considerable changes and permanently changed the landscape of the city in direct and indirect ways.  The freeway displaced thousands of residents, brought increased traffic, and ushered higher density housing that was primarily located south of Orange Grove and north of California Blvd.  The freeway cut off neighborhoods.  The freeways also created a symbolic and substantive dividing line between largely minority neighborhoods north of the 210 freeway (and west of Hill Avenue) and mostly white neighborhoods south of the 210 freeway.​

Additionally, the routing of the 210 and 710 freeways were part of an overall scheme to change/reverse the demographic shifts in Pasadena.  Kings Villages, Parsons, the expansion of Ambassador College (on both sides of the 710 freeway stub), and the Orange Village Townhomes (immediately north of the Pasadena Museum of History) were also part of that scheme hatched in the late 1950s. ​ 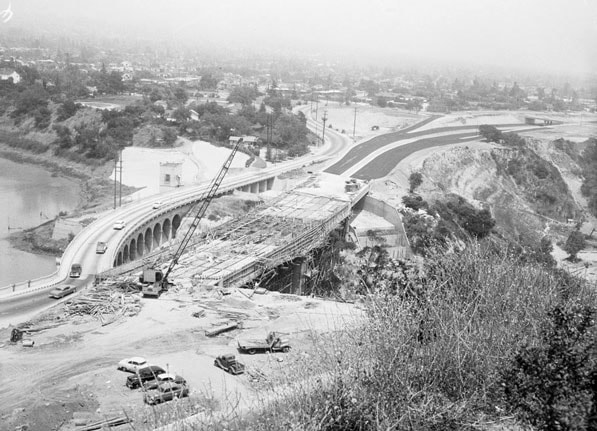 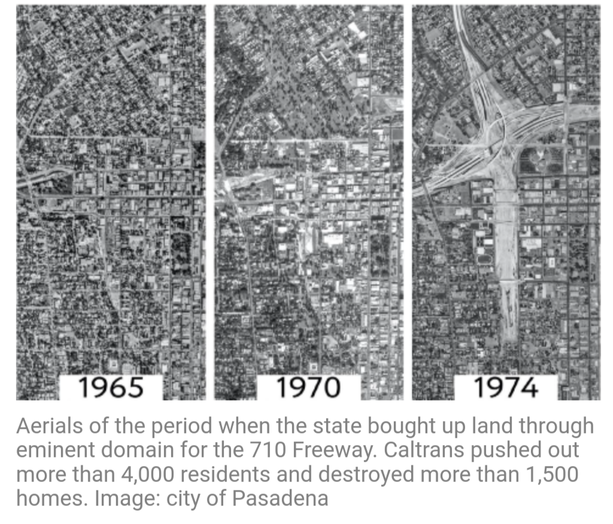